In Afghanistan, gender gaps are widespread in health, education, access to and control over resources, economic opportunities and power and political voice. Afghanistan has one of the lowest literacy rates in the world, currently estimated at about 31% of the adult population (over 15 years of age). Female literacy levels average 17%, with high variation, indicating a strong geographical and gender divide. The highest female literacy rate is 34.7%, found in the capital, Kabul, while rates as low as 1.6% are found in some southern provinces. Male literacy rates average about 45%, again, with high variation. The highest male literacy rates are in Kabul, at 68%, while the lowest are found in Helmand, at 41% (UNESCO, 2015).

It is COAM’s belief that children are the nation’s greatest resource. There is no task more important than facilitating their education in order for them to lead secure, happy lives. Families, schools, and communities each play an important role in a child’s development. The Baba Green School is dedicated to building bright futures for children and their communities.

One hundred and thirty children from five village communities – Sayed Abad, Naw Abad, Dasht-e-sakhan, Zargaran, and Sarasya – currently attend the Baba Green School.  Additionally, there is a kindergarten class for children between the ages of three and five years old and an elementary school for children ranging from six to sixteen years old. It is the only co-educational school in the region, maintaining a gender balance of 50% boys and 50% girls. It is designed to be a model of environmental sustainability and energy efficiency.

Environmental education and awareness is one of the main pillars of COAM’s conservation approach. COAM works to develop a deep understanding of the root causes of environmental degradation and how to prevent them. The installation of solar a solar energy system teaches children and parents alike about renewable energy. It is an interactive way of educating the community about the use of sustainable energy and the environmental benefits of solar power.

With the help of COAM, three solar panels (with a lifetime of 25 years) were installed. A solar water heater was also installed to provide warm water for hand washing and use in the kitchen. The solar energy system is a safe, sustainable, and clean way of powering the school.

The solar energy system receives enough sunlight to generate a daily supply of electricity and to store the surplus for cloudy days and nights. The system provides energy for the entire school, generating enough electricity to power all of the relevant amenities including lights and computers.

Two wood and coal-burning stoves were installed which will heat the entire school throughout the winter. Modifications to the traditional bukhari stoves, which can be hazardous due to their carbon monoxide emissions, ensure a safe and clean environment at Baba School. The stoves will keep the teachers and children warm throughout the winter, which will allow them to better concentrate on their studies. Additionally, curtains have been put up in the windows to conserve heat in winter. Entrance gates to the school have also been installed.

These special facilities greatly support and enhance a child’s education and learning experience. The solar system generates enough electricity to power the lights, heating and energy necessary for the day-to-day running of Baba School. Most primary schools in Bamyan do not have access to these facilities. In winter, there is no electric lighting, heating system or even electricity for the use of computers. Baba School has become exemplary in its leadership of children’s learning. By installing this solar system, COAM and Baba School have greatly increased the children’s capacity to learn throughout the entire school year and enriched the community and the lives of the people who now have access to these facilities.

Baba Green School is expecting an increase in the number of students in attendance due to the implementation of the solar energy system. Now that Baba school has stoves to keep the building warm during the wintertime, and solar panels to provide electricity for computer classes, the school will be able to offer winter classes in addition to classes during the school year, and more students will attend the school. COAM and Baba School have provided children with a clean, safe and wholesome environment in which to learn and grow. 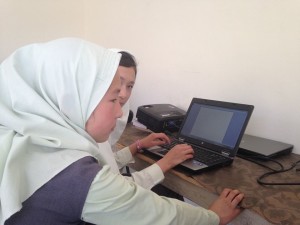